If a game has a very high degree of freedom, players can create a world by themselves. The picture is low-polygon style. The characters look like Lego models. The monthly life is 90 million. Most of the players are under 13 years old. Third-party developers, guess what game?

“Yes”, today we are talking about Roblox, a gaming platform that was launched in 2006-three years before Minecraft.

First of all, it is the same as Steam, there are various types of games to choose from. According to official data, this platform has more than 90 million monthly active users. In 2018, there are already more than 4 million developers on the platform, and more than 40 million games have been developed. All games are free and profitable through props. It is also a game engine, and all games on the platform are developed based on this engine. The screen effect of this engine is similar to that of Minecraft. Anyone can use this engine to develop games for free and upload them to the Roblox game platform. Moreover, the development process is simpler than other engines. According to the official statement, people without programming and game development experience can also build a simple game through this development tool (Roblox Studio).

Simply put, it is a bit like a UGC game community, where you can experience other people’s games, and you can also create a small game yourself and play with your friends.

From the perspective of the game, there are many games that are willing to give the player the control. For example, “Warcraft 3: The Frozen Throne”, “Dota2”, and the more thorough “Minecraft” of the open map editor, but they are just a game from start to finish, and the player’s custom mode is only among all game modes One is not developing in the direction of platformization.

The most direct manifestation of platformization on Roblox is that the first page after you enter the “game” is not a menu interface like the one shown below.

It is an interface similar to the Steam store 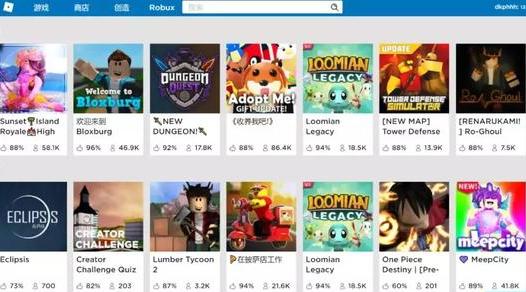 At present, this “game” can be played on various mainstream hardware platforms, including Windows, Mac, Android, iOS, and XBox. It also supports VR devices.

A social platform that looks like a gaming platform

Many people, including me, were “persuaded” by its various flaws when experiencing this “game” for the first time. For example, it looked very “aged” and guided by simple novices. But we are looking at it from the perspective of a mainstream player. Its main audience is not ordinary players like me, but children.

Roblox officially stated that half of the 90 million monthly active users on the platform are American children between the ages of 9 and 12. According to data from market research company comScore, at the end of 2017, Roblox’s PC users under the age of thirteen had reached 51.5 million hours per month on the platform, which was higher than YouTube (19.4 million hours). 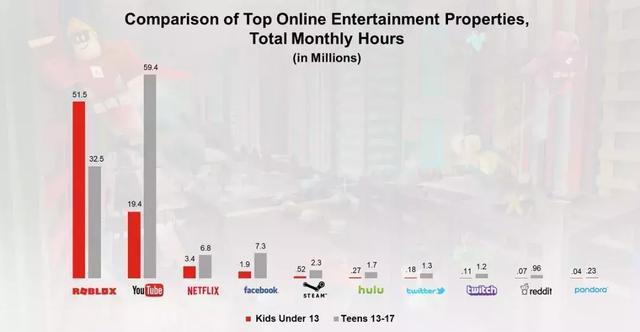 Many mainstream games tend to emphasize competition between players, or set a goal for players to work hard to achieve. But in Roblox, most games neither emphasize competition between players, nor set a goal that must be achieved. One of the most popular mini-games in Roblox is called “MeepCity”, which is like a campus simulator, without a mechanism to guide players to compete, and no main tasks. Players chat, walk, and conduct virtual social activities in this virtual space, just like most students do in school.

And such a special game design actually includes Roblox’s insight into the children’s market. Craig Donato, Chief Business Officer of Roblox, explained: “The number of unstructured and non-oriented games has been declining in the past few years. In fact, children have a lot of homework and extracurricular activities after school. Structural tasks. The need we solve is to give children a space to use their imagination. On our platform, you do not play games to win, but enter a world in which you can interact with other people Share, communicate.”

For children, this is not only a game platform, but also a social platform. In other words, for them, games are part of social interaction. Many people like to play “Play House” when they are young. Several people get together to play different roles and then interact in an imaginary scene. Roblox provides a tool to visualize the imaginary scene.

Therefore, the games here usually emphasize the cooperation between players. For example, in the game “Adopt Me!”, players can choose to play as an adult or a child, and then start a family in a virtual town, buy a house, and dress up their own home, a bit like an online version of “The Sims”, social Very strong.

As a platform, Roblox also has very strong social functions. There are friends system and group functions inside the platform. After friends are added to the platform, this social relationship can be inherited in the game. In “Adopt Me!”, players can select “Only allow friends to invite me as family” in the settings.

Roblox emphasizes the social gameplay and the social functions integrated in the platform, which can not only precipitate the social relationships of players, enhance user stickiness, but also effectively promote the growth of new users and convert the offline relationships of children into the game.

“The main way for new players to learn about Roblox is to receive invitations from friends.” Craig Donato said.

Speaking of the rapid growth in the number of users, Craig Donato summed up two reasons. The first is the development and prosperity of the platform ecology, and the second is the network effect brought by social media.

Roblox now has more than 4 million third-party developers and has developed more than 40 million mini games. So many third-party developers can be harvested because Roblox greatly reduces the threshold for opening the game, and there are almost no restrictions on developers. When you download the Roblox PC version of the client, the development tool Roblox Studio is in the client. This tool is free to use, and the threshold is very low. It does not require game development experience and programming foundation. Because when the company’s founding team designed these tools, it was hoped that children could design the games they wanted.

The low entry barrier development tools and the inclusive platform policy make Roblox’s game ecology very prosperous, with both traditional RPG and various “sand sculpture” mini games. “The diversity and depth of the games on the Roblox platform is something that really resonates with players. It cannot be replaced by a single thing,” said Bhaumik, Roblox’s vice president of marketing.

Because of the advantages of self-developed engines, Roblox has always supported hardware platforms very quickly. In 2012, they launched the iOS side, and soon after that they also launched the Android side, and in 2015 they launched the Xbox One version. There are also versions of HTC Vive and Oculus Rift, which are VR devices that are not yet popular. These platforms are interoperable. You can play together with your mobile phone and your friends with PC. According to a report from Techcrunch, more than half of Roblox users currently play games via mobile.

On YouTube, Roblox’s live video has a maximum of 74.56 million views, and many YouTubers with more than 10 million fan subscriptions use Roblox as their daily recording content—just like Minecraft. AuthenticGames, which has 17.33 million fans, has done nearly 300 Roblox videos. PewDiePie, YouTube’s No. 1 Internet celebrity and 98 million fans, has also made several Roblox videos.

On the game live broadcast platform Twitch, Roblox channel also has 1 million followers. According to the data provided by Twitch Tracker, a third-party Twitch statistics agency, Roblox has a peak live audience of 43,000, and about 68 million people have entered the channel in three years.

“You will find that many people invest a lot of time in Roblox-just watching, not playing. Some people will play these games on places like YouTube and Twitch, and some influencers will also participate.” Craig Donato said.

Word-of-mouth marketing like this on the Internet has brought tangible user growth to Roblox. Even if it is not as famous as “Minecraft” among the mainstream players, you can’t deny that it is popular among children. degree.

Roblox’s own games and development tools are all free, and the profit of the platform and developers all rely on props. The official store mainly sells fashion for model beautification. In games developed by third parties, players can purchase in-game props through the platform’s unified currency “Robux”, which is divided between the platform and the developer.

Enter the campus and the Global market

David Baszucki, the founder of Roblox, first ran Knowledge Revolution, an educational software company. What he did was software that allowed students to simulate physics experiments in computers. In the process of making educational software, Baszucki found that these students treat it with a game mentality. “They will simulate a car crash, a building collapse, or something similar,” Baszucki said.

After Knowledge Revolution was acquired, Baszucki worked as an angel investor for a period of time. During that time Baszucki invested in a company called Friendster, which was competing with Facebook in the social network market. Of course, they failed in the end.

In 2004, Baszucki began to develop an early prototype of Roblox. This game platform combines his early observations of student groups when he made educational software and his later experience as a social platform. Now Roblox wants to return to the education market.

In 2018, Roblox began to promote Roblox Studio in schools in 22 countries, hoping to use this tool to teach children programming and game development. This year they announced a partnership with Tencent to hold a STEM summer camp in China.

According to foreign media reports, they also established a joint venture company with Tencent, located in Shenzhen, with the ultimate goal of introducing Roblox into the Chinese market. We also found that Roblox already has an official website in China, which belongs to Tencent Games. However, this official website has no game content for the time being, only the summer camp project held by Tencent and Roblox.

In China, “Minecraft” is represented by NetEase, and Tencent has no products that can compete with it in the category of children’s sandbox games. Last year, Tencent announced the “Lego Unlimited” is still in the testing stage. This time Tencent’s cooperation with Roblox may be to introduce a product that has been successful overseas to better compete with NetEase.

Moreover, Roblox’s genes happen to have one thing Tencent does best-social networking. Hope the above article is informative. To get more tutorials like this please visit us on our official web page.